So finally we boarded the Paschim Exp with our bikes from Bandra for a long and boring journey of about 30hrs. But the Mannan thing was still pinching my mind. I called him up and told him that I am sorry to over react and you’ll get your money. I asked one of my friends’ to drop him the cash Bandra Station the next day.
Now the biggest problem that was gonna come our way was Unloading the bikes at Ambala from the Amritsar part of train or else the bikes would go to Amritsar. The train stops for not more than 20 min and within that time we had to get down at Ambala with our baggage and run to the parcel office, get a man and unload the bikes. Mannan had promised me to help with this and said that he had informed the Ambala parcel office to unload the bikes. But I dint trust him or the Ambala parcel office to be worry free. So finally the train arrived at Ambala station before time at 3.30pm. As soon as the train haulted the heels, me and chinmay were in full speed towards the engine from our bogie which was the tail of the train. We saw a couple of guys unloading our bikes there and thus took a sigh. Soon the train left and we went to parcel office to ask for the delivery of the bikes which was responded by a big and rude NO. The bikes were booked till Chandigarh and Ambala people were not having the authority to deliver it. So, another drama began for a meagre 40km distance from Ambala to Chandigarh. We were supposed to load the bikes in some other train upto Chandigarh. The guy dint agree to deliver even after lots of pleads and requests. The next train was at 6.30pm and we asked about space in that train and again they said that the brake van in 6.30 train is already full and there is a passenger at 9.30pm where we would get space easily. Having no other option in hand we decided to wait. Meanwhile we just went out to have a walk after putting our stuff in the cloak room. What a horrible scene it was. No place to stand with people crowding along the road, busses and other vehicles honking loud horns, dirty road side food stalls…errrrrrr.

We went to the station back again and tried to get some sleep on the benches. We loaded the bikes in the passenger finally and reached Chandigarh at 11.30pm, the passenger took 2 hours for the 40 km journey…ha ha. After unloading the bikes at Chandigarh, the Parcel guy asked for a Xerox of the ticket. It was about 12 midnight and where the hell am I gonna get a Xerox? He refused to release the bikes without the photocopy. How silly it was. Even we said that let us take one bike, other one we’ll take in morning and bring the Xerox. Still the dumb fucker refused. Giving up at the end, we took a rikshaw and reached the guest house where we had bookings. The next day, it took about an hour for us get the Xerox as I couldn’t find any yellow Board named Xerox anywhere. Later I came to know it is called PHOTOCOPY there, the people didn’t even knew what is a Xerox.
At about 12noon we got our bikes with some minor injuries railway had caused. Got some repairing work done and started off for manali after having lunch. I had heard that Punjabis are cool and friendly. Atleast here they are, I have some friends. But the arrogance and attitude we experienced there really changed the impression on my mind. Better than passing through all this shit it would have been if i had drove all the way. The decision to take the bikes by train was a wrong one as far as for me. I had put myself in problems. Thanks to Indian Railways making me realize that. 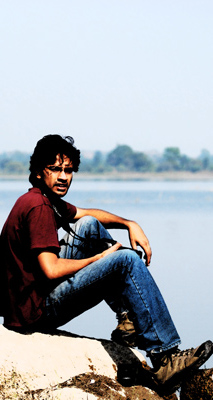